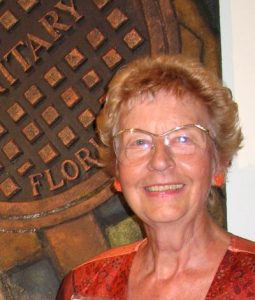 Bobbi Mastrangelo has been selected as one of the finalists in Women in the Arts competition to be held at the Orlando Public Library. March 7 – April 24, 2020. The Women in the Arts Awards reception and “Meet the Artist” gallery walk are on Saturday, March 28 at 2:00 PM. All events are free and open to the public.

From the 136 entries, 17 were recognized: Local: 3-Finalists; 6-Honor Awards; 4-United States; 4-International. Bobbi is one of the three local finalists.

Four of Bobbi’s art works will be on display at the Orlando Public Library for the duration of the exhibit.

”Metropolitan Cover” is a sculpture relief based on a NY manhole cover located on a sidewalk near The Metropolitan Museum of Art. In NYC.

“City of Orlando” is a sculpture relief with a manhole cover on brick pavers based on a scene in Loch Haven Park near The Orlando Museum of Art.

“Blue Bell” is an embossed print on hand made paper based on the hexagonal design of the Bell System Manhole Cover (There is a Bell System manhole cover in downtown Orlando.)

“When the People Care”, is an Anti-Litter Poem composed by Bobbi Mastrangelo. The framed print is collaged with bits of litter including cigarette butts.

Mark your calendar for March 28 at 2:00 PM to see the art and meet the artists. Event cancelled

Due to the Corona Virus, the Library is closed

VOTING with LIKES and COMMENTS are still ALLOWED.

3 thoughts on “Mastrangelo’s Art Exhibited in The Women in the Arts Competition at the Orlando Public Library March 7- April 24, 2020.”