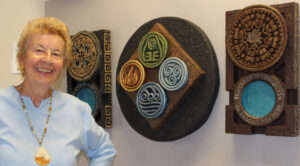 Bobbi Mastrangelo’s triptych , features the Four Elements in the center piece: Earth at the top, (clockwise) Air, Water at the bottom, then Fire.

From ancient cultures to modern societies, the Four Elements — Earth, Wind. Fire, Water — have provided various explanations about aspects of the material world, the forces of energy, and the attributes of human nature. The Four Elements had a profound influence on science, philosophy, religion, and medicine.

The text inscribed around the simulated water fount is “El Agua Es Sagrada.”  (Water is sacred)  “Es La Sangre de La Madre Tierra. (It is the blood of Mother Earth.) Jorge Argueta graciously gave permission for me to use these words from his poem “El Agua.”

Bobbi enjoyed researching the ancient Aztec, Mayan and Nahuatl Cultures for the borders and designs of the two outside pieces. Atl, the Aztec symbol for water is located in the center of the starburst design. 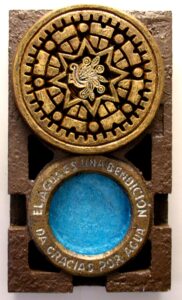 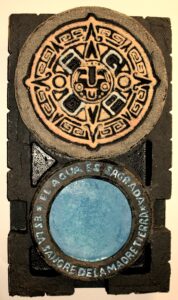 But it was the contemporary Water Researcher, Masaru Emoto, who influenced the third piece.  “Water is a Blessing, Give Thanks for Water,” Bobbi inscribed the Spanish Translation around the water fount: “El Agua Es Una Bendición.  Da Gracias Por Agua.”

Emoto believes that: “It is our individual responsibility to learn all we can about water, the most precious resource on the planet and to help shift the consciousness through our thoughts, words and prayers to appreciate  WATER.

Bobbi felt Spiritually Blessed as she created this triptych and hoped that Argueta’s philosophy about honoring Mother Earth and Emoto’s revelations about water would resonate to the viewers.

Unfortunately, I will not be able to see the art works for The Four Elements, but if some of you are able to see this exhibit, please share your experience with me: grateworks@aol.com.