Story by the Artist
Download/Print PDF

“Don’t Go Soft on Terrorism!” was actually created using thick pillow foam. Cutting the pillow foam was easy. But covering the soft foam grate and its support rim was a challenge.
It was tricky and sticky. Fitting the material over curved edges required many cuts, plenty of fabric glue and a zillion dressmaker pins to secure each area until it dried.
After the camouflage pattern was painted in acrylic, it did appear authentic and durable. But its softness surprised anyone touching it.

First I created a support for the rim, which is called a chimney. To the backing piece, I added a dimensional collage.
Bold white letters spelled out: ACT OF WAR. The letters were suspended above billowing clouds of oily black smoke. This dreadful attack on our home turf September 11, 2001 was not an accident. It was a calculated ACT of WAR.

On the left, I inserted a small photo of the original twin towers.

The Architect, Minori Yamasaki’s vision for The World Trade Center was a living symbol of man’s dedication to world peace.
As I printed out his message for world peace, my eyes misted. The paper was aged with watercolors. I burned the top and bottom edges, and rolled the sides over little dowels. It looked like an “historical document:” a representation of man’s belief in humanity, his need for individual dignity and global cooperation.“

In the center scene, terrified people fled from the towers through smoky debris-littered air.

On the right, The American Flag boldly waved its red, white and blue. “Old Glory” was a beacon of hope in contrast to the ghostlike scene of the crumbling south tower

The last scene I added was the most heart wrenching. Five brave, soot-covered firemen grimly carried a fallen hero on a stretcher. The sixty-eight year old Fire Department Chaplain had been giving last rites to a fallen firefighter, when crashing debris killed him. Chaplain Mychal Judge was listed as the first body to be released from Ground Zero. Number one was attached to his death certificate. 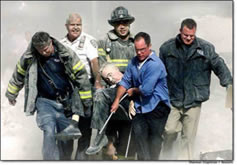 After adding that last crucial photo to the collage, I was emotionally drained. I don’t believe I have ever been so sadly and passionately consumed by any artwork, as I was when I created “Don’t Go Soft on Terrorism.”

For more information, contact the artist by e-mail: bobbi@bobbimastrangelo.com