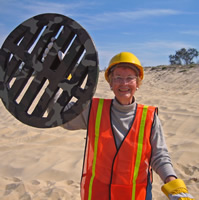 Bobbi Mastrangelo, The “Grate Artist”, is internationally known for her unique creations based on the theme of manhole covers. Deeply embossed prints on her hand-made paper transform the mundane iron covers into jewel like mandelas. Her tromp l’oeil sculpture relief works artistically capture the essence of utility covers in urban settings. Their appearance is so realistic that viewers wonder how she managed to put all that “weight “ up on the wall.

The Baltimore Public Works Museum and The Islip, NY Art Museum have extensive collections of the artist’s works. Other museums owning her work are The Heckscher Museum of Huntington, NY, and the Zimmerli Art Museum at Rutgers University (National Association of Women Artists’ Permanent Collection).

The Moscow web site: www. Sewers.artinfo.ru entitled “Sewers of the World, Unite” features not only her art works, but also art happenings and a poem about her manhole cover adventures. .
The former “Barbara Betschen” graduated cum laude with a BS in Elementary Education at SUNY Buffalo NY where she met her future husband Alfred. She must have had an inkling that one day she would follow her dream. Surely a last name like Mastrangelo would sound much more like an artist. First an Elementary School Teacher, who always stayed in the classroom to learn from the art teacher: then a Stay – at Home Mom.

When the urge to create could no longer be suppressed, Bobbi took most of the basic under graduate art courses at SUNY, Stony Brook, NY and Suffolk Community College in Selden NY. Influential printmaking instructors included Dan Welden, Gail Cohen Edelman, Clare Romano and John Ross. Papermaking was studied at Manhattan Graphics Center and at The Women’s Studio Workshop in Rosendale, NY. The sculpture techniques of the wall relief works are her own development.

Bobbi returned to the classroom part-time as a title one tutor in “The Three R’s”
Here are some excerpts from a fifth grader, Robby Grisafi. His article appeared in Smithtown Elementary School Newspaper in 2003 after she retired:

“Bobbi Mastrangelo, a former elementary schoolteacher is now a Port Jefferson Artist. Her art is very different than most people’s idea of art. She makes reliefs and sculptures of manhole covers. Bobbi has been doing her art ever since the 1980’s.
Manhole covers are covers used by town, utility and municipal workers to gain access to everything underground like storm drains and gasoline pumps. She does this art not only for a hobby, but to preserve history. Some of the manhole covers could be over 100 years old and not be here anymore, so she likes to preserve history.”

Some of her distinctions include:

Phyllis Braff an art critic for The New York Times summarized her art as follows:

“ Reliefs by Bobbi Mastrangelo based on sections of roadway and sidewalk, reinterpret gratings, manhole covers and paving as abstract shapes without sacrificing their commonplace associations. By zeroing in on these details and exploiting their formal potential, the artist literally elevates them from the utilitarian level.”